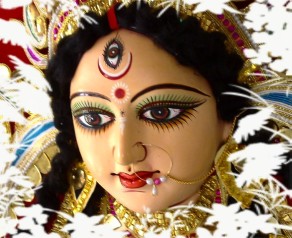 Vasanta Navaratri is celebrated during springtime in the lunar month of Chaitra (March-April) and ends with Ram Navami.  Lord Rama who was born on Ram Navami is the ideal concept of human perfection and is called ‘Maryadapurshottam’ with a perfect sense of duty, sacrifice, discipline, equanimity, love and kindness. Sarvesh Pundit the chief priest of a temple in Aligarh says, “He is believed to be the seventh incarnation of Lord Vishnu.” That is the reason Vasanta Navaratri is also called Ram Navaratri. Vasanta Navaratri and Ram Navami are widely celebrated in Northern India.

Navaratri are the nine auspicious nights dedicated to worship Goddess Durga and her nine forms. Prof. Madhu Datar a learned spiritualist says, “She is a form of ‘Shakti’ who is the omnipresent power in the entire universe. She is the primordial or primeval energy of nature but the devotee of her positive qualities finds her most benign, kind, merciful and she blesses with grace and enlightenment.” According to ancient scripts, Goddess Durga manifested herself into three major forms namely, Maha Saraswati, Maha Lakshmi and Maha Kali who are the active energies of the divine trinity Brahma, Vishnu and Mahesh respectively. These three forms of the Goddesses further manifested themselves into three more forms each, thus leading to the nine forms of Goddess Durga. These nine forms are termed as Navadurga. These forms are the life phases of Ma Parvati, the wife of Lord Shiva (Mahesh).

The nine forms of Goddess Durga are:

One thought on “Nine forms of Goddess Durga”

"Everything you do or say is public relations."

The blog of author Nancy Livingstone

Thoughts on art, creativity, and the writing life.

Photography at a different level

The Adventures Of Canon 1100D

I take photographs with my Canon eos 1100D. I share my favourites with you.